As I am sure you are aware there is increased concern regarding the Omicron variant. The updated guidance is that people should work from home where they are able to, face coverings are now mandatory in most indoor spaces (unless...

It Is now 75 years since the end of the Second World War and a small group commemorated VE Day on the 8th May and VJ Day on the 15th August outside the village chapel led by the Reverend Sue Swires.

Regrettably the Covid restrictions prevented us holding our annual remembrance service this year that has been a great disappointment to many.

The Second World War commenced on the 3rd September 1939 and lasted nearly six years and was followed by years of rationing into the 1950s.

The British Expeditionary Force set off with high hopes that the war would be over by Christmas, how wrong they were.

The war was not just fought in Northern Europe but was world-wide, taking place in Southern Europe, North Africa, South America and the Far East in Burma and India and the Pacific Islands as well.

We owe so much to all those who served and died and we will continue to remember all those from both World Wars and other wars who gave their lives on behalf of their country especially the 23 men from our small village community.

For the freedom of the world these lives were given and for all time shall their names be honoured. 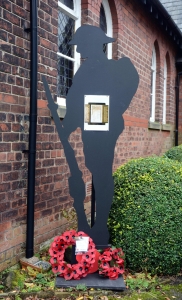 They shall grow not old as we who are left grow old.

Age shall not weary them, nor the years condemn.

At the going down of the sun and in the morning.

When you go home tell them of us and say –

For your tomorrow we gave our today.