As I am sure you are aware there is increased concern regarding the Omicron variant. The updated guidance is that people should work from home where they are able to, face coverings are now mandatory in most indoor spaces (unless...

History of the Village Hall

You are here: Home1 / The Village2 / History3 / History of the Village Hall
Main content

A Village Hall project had been under consideration since 4th May, 1922 when a meeting of Villagers was held with the objective of forming a Social Club. For various reasons the raising and collection of funds and the realisation of construction took a further twenty seven years:-

In 1938 Mr G Taylor Jackson was appointed Trustee and in 1939 Mr Batley and Mr J Ford joined the Committee.

The objectives of the Village Hall property contained in the original Trust Deed ran, as follows:-

‘‘The property, which includes the Village Hall, is held in trust by the Charity Commissioners and shall be used for the purposes of physical and mental training and recreation and social moral and intellectual development through the medium of reading and recreation rooms library lectures classes recreations and entertainments or otherwise as may be found expedient for the Parish of Mottram St. Andrew in the County of Chester and its immediate vicinity without distinction of sex or of political, religious or other opinions’’

For many years the second world war made realisation impossible and in 1943 the Trustees invested the sum of £220 in Defence Bonds.

In 1946 the Committee called a public meeting when it was decided to continue to raise funds and outline a scheme for a Recreation Centre.

In 1947 a scheme was prepared and a temporary building costing £3000 was erected. Towards this amount the National Council of Social Service provided £2000. The building remained their property and was rented to the people of Mottram St. Andrew at an annual rental of £13.

The Mottram St. Andrew Old Scholars Dramatic Society was formed in January, 1932 due to the stimulation of Mr W Blackwell who was the Village schoolmaster at the time. In May, 1934 they won the first prize at the Alderley Edge Musical Festival, Dramatic Section, with a play called ‘Black Dogs’. The Society specialised in, and was successful with plays of a rural nature. In 1946 it linked itself closely to the Recreation Centre Committee and handed over its funds and assets to that body. For the next two years it carried on as a drama group attached to the Committee.

Prior to the opening of the Hall plays were performed in the School.

The Recreation Centre (Village Hall) was opened on April 30th 1949 by Sir Noton Barclay. (Sir Robert Noton Barclay, 11 May 1872 – 24 November 1957, was an English export shipping merchant and banker and a Liberal Party politician)

Princess Margaret had been invited to perform the opening ceremony but regretfully declined the invitation. However, in a kindly letter she extended her best wishes for the success of the centre.

A message from Sir Noton Barclay on the opening day read :-

‘‘I congratulate the residents of Mottram St. Andrew on the fulfilment of an effort which has lasted for some years to provide a Village Hall, the need of which has long been felt.

Thirty years ago I was actively associated with the establishment of a similar hall in a neighbouring parish, and, having in mind the success of that enterprise, I welcomed the efforts I found in being on arrival here for the provision of similar facilities for the residents of Mottram St. Andrew.

April 30th 1949 was a great day and there must have been few people who were not at the Village Hall sometime between 3.30 and 11.45 pm. The proceedings included a mime by Miss Wilcock, a one act play ‘The Grand Cham’s Diamond’ by Alan Monkhouse given by the Mottram St. Andrew Dramatic Society, and it was followed by a Social and Dance.

Immediately, the Village Hall was in constant use for all kinds of activities and local Clubs and Organisations held their meetings there. 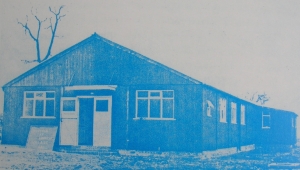 It was during the early 1990’s that the Village Hall Trustees identified the need for complete renovation and considerable effort was made to mobilise Villagers, to secure funding and to undertake a phased rebuilding programme.

Planning approval for a new Village Hall was given by Macclesfield Borough Council based on a design by Inside Out Design Partnership of Ashton under Lyne. The challenge was the building of a new structure on the footprint of the existing building causing minimum disruption to the activities being enjoyed by the local community.

The design solution was to overbuild and to completely enclose the existing Hall so that construction could take place concurrently with the holding of the usual meetings and events. An additional advantage of this design solution was that the rebuilding programme could take place to coincide with the progressive availability and receipt of funds.

The first phase of the rebuilding project included the erection of a steel frame over the existing building and the construction of new entrance lobby, kitchen and toilets (including those for disabled). The work was completed in April 1995 at a cost of £70,000.

Demolition of the old Hall took place once the new superstructure was weather tight.

The remaining phases of redevelopment and construction were completed at a further cost of £90,000.

The Management Committee under the Chairmanship of Mr D Parkinson had raised the remarkable total of £160,000 for the rebuilding work and the rebuilt and completed Village Hall was officially opened in July, 1996. 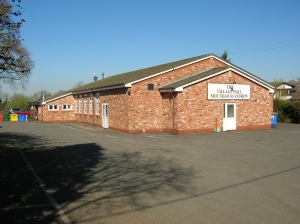 The Village Hall facilities are developed and maintained by Trustees appointed by Villagers at an AGM that is normally held in March. The Trustee Members are set up as a Committee comprising Chair, Secretary, Treasurer and up to nine other Members. One of the Members also serves as Bookings Secretary.

Information for this document has been gathered from the following:-

1 History of Mottram St. Andrew – compiled by Miss N Snape and published in 1952