There have been two School Buildings in the Village. 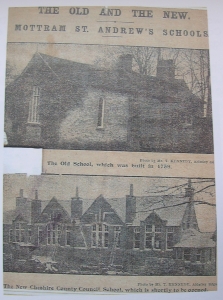 It was built on land adjacent to Mottram Cross near Smithy Lane and was originally a seventeenth century one-up-and-one-down chicken farm to the Old Hall. It developed from a refuge for tramps and vagabonds, who slept in the grounds and lived on the fish from the trout pool, into a penny-a-week parish school which, following inflationary trend, later went to the exorbitant fee of sixpence!

The School was opened in approximately 1850. At one time nearly 100 children attended and there was a choir trained by the Headmaster.

During the war the School building became headquarters for the Home Guard and in 1947, after the war, it became the home of the District Nurse.

The School building came into private ownership and the first owners, Mr and Mrs F Pollitt obtained a licence to make the house habitable and proceeded to have it reroofed. It became clear that the walls were not capable of supporting the proposed roof structure and, under many further licences, the entire building was demolished and rebuilt over a period of three years using a mellow brick under a stone roof. It retains some of the original details.

Interestingly, it is (2010) the only building in Mottram St. Andrew that is listed on Cheshire East Council’s list of locally important buildings – Macclesfield Area. 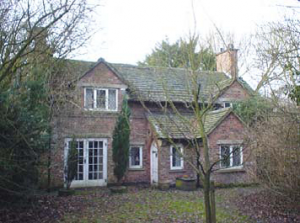 It was proposed by the Education Committee that The New School would be built on Mill Lane near Mottram Bridge but the Parish Council meeting held in October 1904 objected to the proposal on two issues. Firstly, the children, then 80 in number, would have to walk a long way to School and, secondly, the site by the River Bollin was considered unsuitable as the river was polluted.

The present site at Kirkleyditch was proposed by the Parish Council and subsequently accepted.

The New School was designed to accommodate about 100 children and it was built in 1907. It was officially opened by Colonel George Dixon, Chairman of Cheshire County Council on 8th August, 1908.

The first meeting of the managers of the new school took place in July, 1908. Mrs S E Greg was the chair and correspondent. She was the wife of Walter Greg who was the grandson of Samuel Greg who built Styal Mill.

Mrs Greg was still correspondent of the school when she died in April, 1932.

The first Headteacher of the New School was Mr Parkinson and the uncertified teachers were Miss M Smallwood of Macclesfield, Miss M Aldcroft of Bowden and Miss E Marshall of Stalybridge. The caretaker was Mrs Pearson.

In 1909 a stained glass window, made and installed by Morris & Co the firm which William Morris the designer (famous for his association with the Pre-Raphaelite Brotherhood and the English Arts and Crafts Movement) founded in 1861, representing St Christopher carrying the Christ child was put in the Hall in memory of Mr Walter Greg of Lee Hall who had died in 1906.

In 1945 and after the first world war the Roll of Honour – the gift of Mrs Greg – was placed in the School. It is an illuminated parchment framed in oak and covered by oak doors. The parchment records the death of twenty men and on the inside of the doors are the names of fifty four others who also served in the Forces. The Roll of Honour was transferred to hang in the Methodist Chapel during the 1950’s, where it remains today.

Mrs Greg took the greatest interest in the School. She used to visit it frequently and arranged parties and plays.

Before the Recreation Centre (Village Hall) was built and opened in 1949 the School was the centre of almost all Village activities including the Parish Council meetings.

From the start the drains and waste disposal were substandard and they were a constant source of concern, complaint and ‘upgrade’. It was not until the early 1960’s that proper plumbed toilets were installed.

In 1932 electric lighting was brought into the School.

In 1961 there were 27 children on the School register but it was during the 1960’s that the site of the original School was extended.

In 1971 there was strong opposition to the proposed closure of the School and a deputation was led by Mr Preece, the head of the Parent Teacher Association. The Parish Council heard at a meeting on the 1st Feb 1973 that a decision had been made not to close the School.

In 1985 meals were cooked on the premises for the first time.

In 1988 there were 40 children on the School register and, under a national scheme for the rationalisation of schools, the School was threatened with closure, for the second time in its history. Due to constant persuasion and pressure from Governors, Staff, Parents, Local Councillors, Villagers, Nicholas Winterton MP and all connected with the School in February of 1990 it was confirmed to be safe from closure.

On 1st April, 2011 the School achieved Academy status and the School is currently known as Mottram St. Andrew Primary Academy.

Since the late 1990’s the School has been extended with additional classrooms and facilities to accommodate more children attending from a wider catchment area. Three new classrooms and an early years unit have been built, the kitchen refurbished and new accommodation for staff, a study room and other facilities have been provided. The playing field area has been significantly enlarged.
The School had been teaching pupils about its centenary for a year so that it would help them to appreciate the occasion and in June 2008 the School celebrated its centenary by throwing one big party for pupils past and present, teachers old and new and Villagers. Teachers and pupils dressed in traditional Edwardian costumes, like those worn 100 years ago, and, together with the Fallibroome High School drumming band, headed out on a parade that was watched by Villagers all around the Village. After the parade the School opened its doors for everyone to see an exhibition of photographs and testaments that had been painstakingly compiled to chronicle its life and times. The evening finished with a barbeque, bar and plenty of fun.

School’s Centenary Parade – Children and Staff dressed in Edwardian costume
Mottram St. Andrew Primary School Centenary Souvenir 1908 – 2008 was published. It is a wonderful document recording the School’s life and times including a time-line of events, recollections from past and present pupils, staff and parents and photographs. A complete photographic record is included for each class and pupil attending the School in Centenary year. 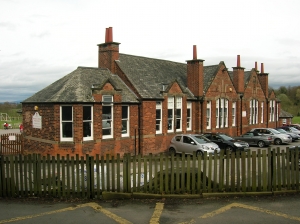 View of the rear of the School, Playground and Playing Field from Moss Lane

View of the School from Priest Lane

Mottram St. Andrew Primary School, latterly, became a Foundation Primary and was called Mottram St. Andrew Foundation Primary.
The number of children on the school register in 2010 was 166.
On 1st April, 2011 the School achieved Academy status and the School is currently known as Mottram St. Andrew Primary Academy.
It was the first primary school in Cheshire East and one of the first primaries in the Country to take advantage of the opportunities of Academy status. The Secretary of State for Education, Michael Gove, recognised the fantastic work carried out at the School. Academy status enables the School Governors and Staff to innovate and to continue to raise its high standards still further. The School can make all the decisions about investing in the children’s education itself.
Soon after becoming an Academy the school was inspected by Ofsted and gained “Outstanding” in every area.
The School continues to be forward- thinking. Mottram St. Andrew Primary Academy became a Teaching School in September 2013 and works with The Fallibroome Academy to lead the Silk Teaching School Alliance. Teaching Schools are responsible for raising the quality of teaching and learning in the local area by providing a range of profession development and support for both trainee and experienced teachers.
The School caters for children between the ages of 4 and 11 and serves the Village of Mottram St. Andrew and the surrounding area. Most children move onto The Fallibroome Academy in Macclesfield.
The following statement has been abstracted from the School’s website:-
The children at Mottram are taught in single-age classes and we have one class for each year group from Reception to Year 6, each class with no more than 24 children.
The headteacher, Mrs. Christine Bowen, is very experienced and highly regarded.
All the teachers are highly-skilled, motivated and committed professionals. They are supported by an excellent team of teaching assistants. Our teaching strategies are based on research into the way children learn best and involve a lot of activity and fun!
Our curriculum is very creative and subjects are taught in a cross-curricular way ensuring that the learning makes sense as a whole.  Reading, writing, mathematics and IT are given a high priority. Each child’s progress is carefully monitored and we are particularly proud of the way in which we meet the needs of those children who are particularly able and those who need extra help to achieve their potential.
We are a very inclusive school with a record of success with children with a variety of special needs.

A wide range of sporting and musical activities are enjoyed by our children both during the school day and as extra-curricular activities. An assembly which sets the tone for the moral and spiritual development of the children takes place each morning.
Much of the quality of a school can be experienced when visiting. The learning on display and the enthusiasm of the children show what an exciting place our school is. We are justifiably proud of the high standards achieved.

The future of Mottram St. Andrew Primary Academy is assured.
It is possible to obtain more, and up to date, information regarding the School, its policies and its activities on the School website www.mottram.cheshire.sch.uk

The School is twinned with Dennegeur School in South Africa. Mrs Bowen, first visited in 2004 during a week long study trip for headteachers. She visited many schools during this week but Dennegeur stood out because the principal, Mrs Sonia Hardneck, and her staff were doing a great deal for the children in their care with very little in the way of resources. The link has grown from strength to strength. Many of the teachers and teaching assistants from Mottram St. Andrew have visited over the years and staff from South Africa have visited here. The link allows the children to have first-hand experiences of life in a different country and gives them a sense of their responsibilites in the world. It has been instrumental in the School gaining the International Schools Award.
Dennegeur is situated about 1 hour drive away from Cape Town in an apple growing region. The parents mostly work on the apple growing farms but much of the work is seasonal and there is a lot of poverty.
Since 2004 the School has raised a considerable amount of money to improve the Dennegeur School, including building a new classroom, an entrance and staff facilities. Donations help to fund three extra teachers a year and some parents and staff sponsor children to go onto Grabouw High School in the local town which has made a tremendous difference to the lives of the children at the School and to their future prospects for life.

Headteachers at the School (incomplete)

Information for this document was obtained from the following sources:-